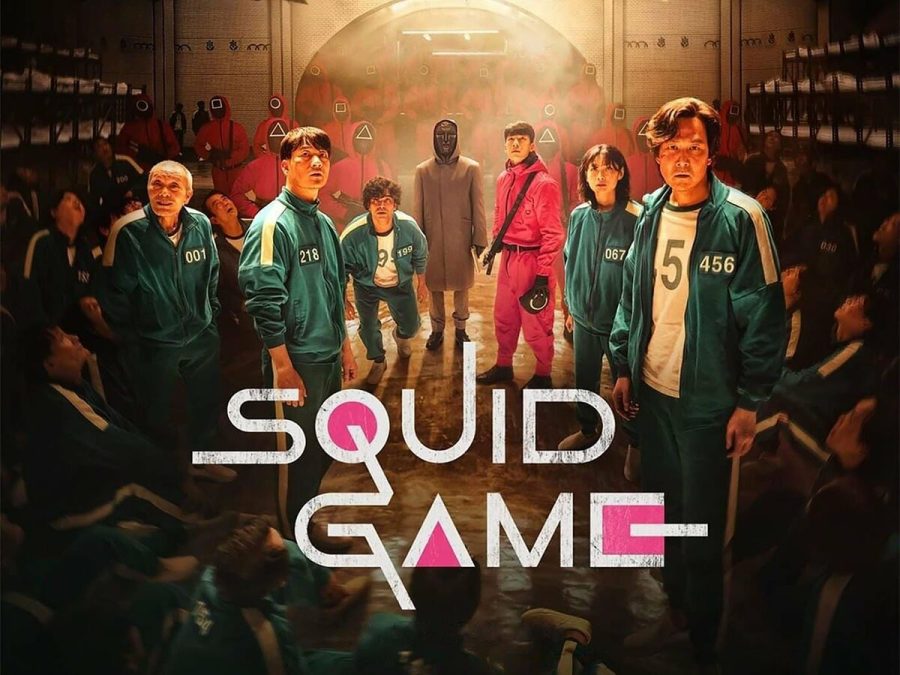 Squid Game is Netflix’s new South Korean hit series: it is dark, political, shocking, and a perfect amount of imperfection.

Revolving around 456 debt-ridden entrants in a deadly competition with the possibility of winning a fortune, Squid Game uses its premise to comment on societal woes while telling a personal story of desperation and betrayal.

Our protagonist, Gi-hun, enters the competition so he can pay for his mother’s mounting medical bills and save himself from the loan sharks who torment him.

Once in the competition, the entrants learn they will play childhood games such as Red Light, Green Light; however, if one loses the game, they are executed on the spot.

This death-game concept has been done many times before, but Squid Game mostly keeps it fresh with its excellent visual design, score, and allegorical meaning.

During the childhood games, Squid Game’s set and costume design, possibly its best aspect, truly shines. The games take place within exaggerated, striking playground sets, overseen by staff in bubblegum-pink jumpsuits. The sets and costumes are child-like and unassuming, making moments of violence within the show all the more shocking and contributing to its unnerving atmosphere.

Squid Game builds its atmosphere through its now-iconic score “Pink Soldiers”. With four repeated notes, it creates a sense of impending doom.

These aspects, sets, designs, and score, all contribute to Squid Game’s extreme potential for iconography. Just look at how many people dressed up as a contestant or staff-member from the show for Halloween this year.

Above all, Squid Game is memorable, a large reason it spread so quickly and managed to make Netflix nearly $1 billion on a budget of $21 million.

However, Squid Game’s intentions are not solely to entertain. The show is clearly intended as commentary on capitalism. With a golden piggy bank hoisted above their heads, each contestant must succeed by any means, even by betraying others. It mirrors the cut-throat markets that left these contestants with crippling debt in the first place.

Squid Game’s commentary is anything but subtle; however, this aspect proves to be a positive, as it makes the message unable to be ignored. It is nearly impossible to watch the series without grasping the metaphor, which is important for a show with such a wide reach.

In fact, the impact of such direct commentary is already being felt.

On October 20 of 2021, Members of the South Korean Confederation of Trade Unions protested lack of job security while wearing masks and costumes from the series.

At the center of every great show is not a moral, a set, or a score, but a story. Sadly, this is where Squid Game proves lacking. Many members of Squid Game’s ensemble cast are weakly-defined and difficult to empathize with.

Han Mi-nyeo, a con woman and supporting character, epitomizes the worst of the series’ character writing. Her character is over-acted, one-dimensional, and often cringeworthy. She remains the unchanged throughout the show, and commonly ruins otherwise good scenes.

In addition to weak characters, Squid Game’s plot is standard, predictable, and, at times, repetitive. At its core, the show’s writing does not hold water when compared to its presentation.

However, one specific episode of the series bypasses these issues, while reaching the show’s pinnacle of plot, presentation, and emotional potency.

This episode is the sixth of the series, “Gganbu”. In this episode, the remaining contestants must pair up, assuming they will compete against each other in teams of two.

We enter a gorgeously designed set of a small neighborhood, and each team is given a set of marbles and told two things: one – that each team gets to choose what game they play, two – that the two people on each “team” will face each other. Immediately, the alliances we have seen form over the last five episodes are shattered.

This setup is incredible, allowing for variety in that each team is playing a different game, and creating a suffocating sense of doom by ensuring the death of major characters from the start.

“Gganbu” is heartbreaking and emotionally raw, and as fan-favorite, innocent characters drop like flies, every contestant that manages to move forward is deeply shaken.

As metaphor, “Gganbu” shows the deeply personal repercussions of modern capitalism. Contestants manipulate and betray each other with the justification that they have to prioritize self-preservation. The game forces them to make the worst decisions possible to have any chance at survival.

“Gganbu” is quite possibly the best hour of television released this year, and would have served as an enthralling, perfect conclusion to season one. Yet, the show continues for three episodes, and unfortunately, they pale in comparison.

There is a drastic drop in quality after episode six, as the writers frantically attempt to close the story, likely wanting to give a sense of closure in case the show was not renewed for a second season.

The final three episodes are rushed, killing off characters in unimpactful ways and revealing mysteries that should have remained hidden, all to reach an illogical ending that betrays the protagonist’s established character.

Squid Game has already been renewed for season two, and given its immense popularity, I hope the writers prioritize the long-term in future seasons and salvage the messy ending of season one.