Drama Club Presents War of the Worlds: A Panic Broadcast 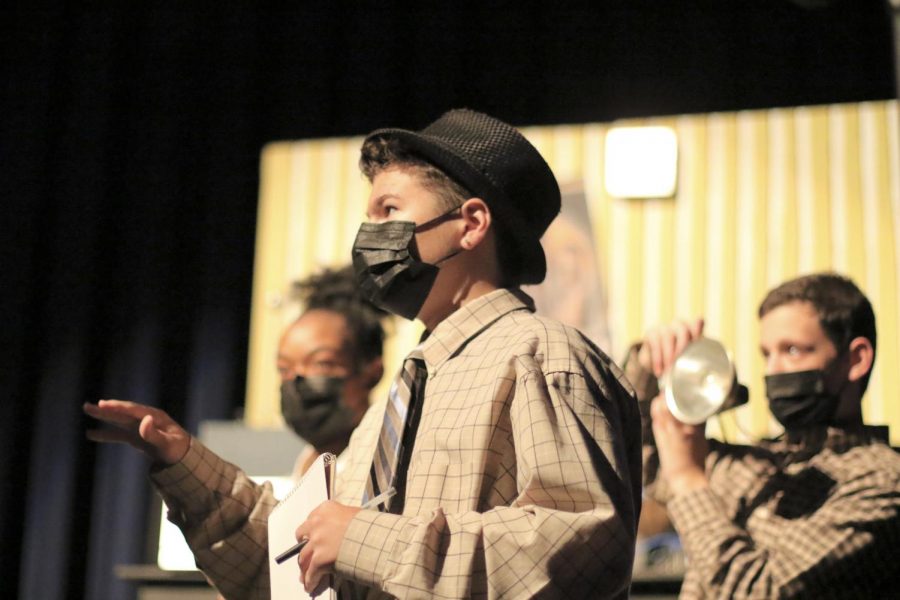 Marcello Messina while rehearsing in The War of the Worlds: A Panic Broadcast.

For the first time in almost two years, Monroe-Woodbury High School performed a fall drama, presenting War of the Worlds: A Panic Broadcast by Joe Landry. The performance took place on November 5 and 6, and was hosted both digitally, over Broadway on Demand, and in-person at the high school.

According to Christopher Klein, War of the Worlds: A Panic Broadcast is a play based off of the real-life broadcasts, hosted by famous actor Orson Welles. In these broadcasts, members told short stories, one of which was an alien invasion story. Audience members who joined the broadcast late thought there was an actual alien invasion happening. This drama took place on Oct. 30, 1938, commemorating the tenth anniversary of the original broadcast.

When this broadcast aired, panic ensued, as thousands across the country believed life as they knew it was over.

Allegedly, due to the stress of this unexpected broadcast, police calls, miscarriages, early births, and deaths were all reported. After it was confirmed to the people that this show was fake, and an alien invasion was indeed not actually happening, they were outraged; Welles was sued.

“I chose this play because of the idea of society panicking felt topical and that this production has room for a lot of actors. We wanted to get as many students involved as possible,” said Ms. Balousek, the play’s director.

This year, the Drama Club has had many newcomers participate in the fall show.

“We have more students involved this fall than we ever have before, over 60 students,” said Ms. Balousek.  “Worth it? Absolutely. It’s been so wonderful seeing everyone involved and seeing everyone come together.”

According to Ms. Balousek, the show had to adjust its schedule this year, rehearsing in split shifts, and alternating cast rehearsal times in order to limit exposure. Closer to the performance date, they had full cast rehearsals in order to prepare for the production. Student actors were required to follow COVID-19 guidelines and wear masks while on stage.

This drama differs from those of previous years because it uses many sound effects that were never incorporated before, according to Mr. Kerstanski, the Audio-Visual Club adviser.

“I feel like this is what’s good for me,” said Coloma.