My Virtual Experience in Odyssey of the Mind 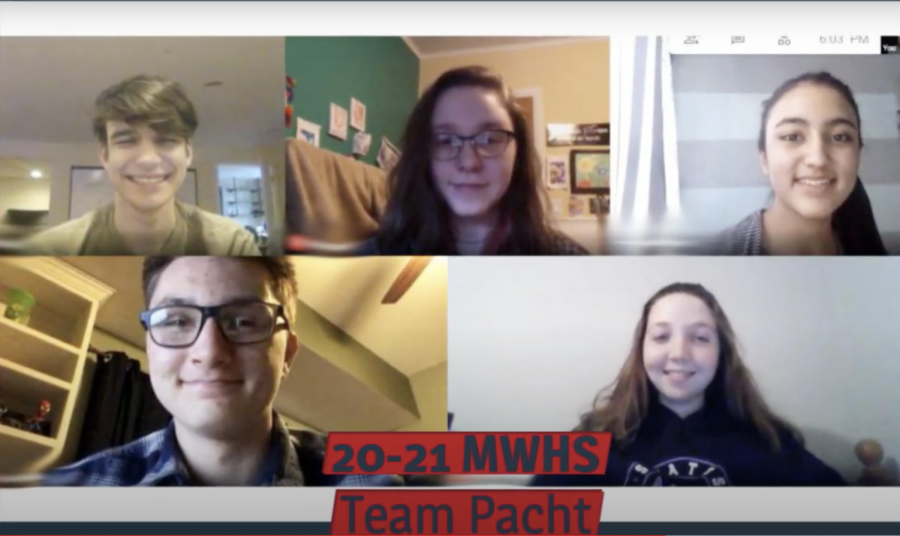 My team in Odyssey of the Mind, a creative problem solving activity, recently finished 5th in the virtual state competition.

Odyssey of the Mind is a problem solving program where a team of up to 7 students, led by a coach, are assigned a problem that they must solve in a creative or “out of the box” way. The team will then present this solution as a performance to a panel of judges at a regional competition, and have a chance of moving on to the state and national level if they score well.

Odyssey of the Mind is a very hands on experience, with most of the work being done in person and together as a whole team. Due to the pandemic, all meetings this year were held virtually, which posed many challenges as well as benefits to me and my team.

One benefit to the club being conducted entirely virtually was the amount of practice we were able to have. Previous to the pandemic, a team could only meet as late as 5 P.M for practice, and only on very rare occasions could we meet past this time. In a virtual environment, however, we were able to schedule our meetings with much more flexibility.

“An advantage of meeting online would be creating the schedule,” said team member Amara Leitner. “We didn’t have to do it right after school or worry about a ride home”.

One challenge that my team and I faced throughout the season was the building aspect of the problem.

After a script is made, a set and props are designed for the solution to be used in the performance. While some members of the team work on certain projects more than others, everyone is able to provide input and contribute to the finished product of any physical object created.

This year we instead had to assign projects to be completed by entirely one person of the team, as props had to be kept at each member’s house instead of at the school. This limited the teamwork aspect Odyssey of the Mind usually has, as work normally done together by the whole had to be done completely individually.

“We were all doing our own things,” said team member Sophie Baer. “It was impossible for other members to understand what I was doing.”

In terms of competition day, unlike the usual live performance in front of a panel of judges, our team was instructed to perform and record our solution over Google Meet, and send it to the judges along with a second video explaining it.

This new method of performing came with its benefits and disadvantages.

Compared to performing live, our team recorded our performance multiple times, and were able to scrap a bad take and try again until we reached our best possible performance.

This virtual performance also limited us greatly, though, because not being physically present next to each other delivering lines and following stage cues were more difficult.

In addition, we experienced many technical difficulties throughout the recording process as well. This included the recording not having any audio, members not sounding loud enough during the performance, and audio delays.

“Elements beyond our control, including wi-fi, technology, and hybrid schedules, sometimes made things challenging,” said Mrs. Pacht, who coaches the team.

Overall, while I do believe that Odyssey of the Mind being done in a virtual environment allows certain perks we would not normally get, the regular in-person experience is not only more productive but more enjoyable as a whole.

There are hopes that by next year performances can be done live again, however it depends on the state of the pandemic by that time.

“If we are still online next year, we already know what areas we need to fix,” said Leitner. “If we are in person, we still have another year of experience and practice under our belts.”