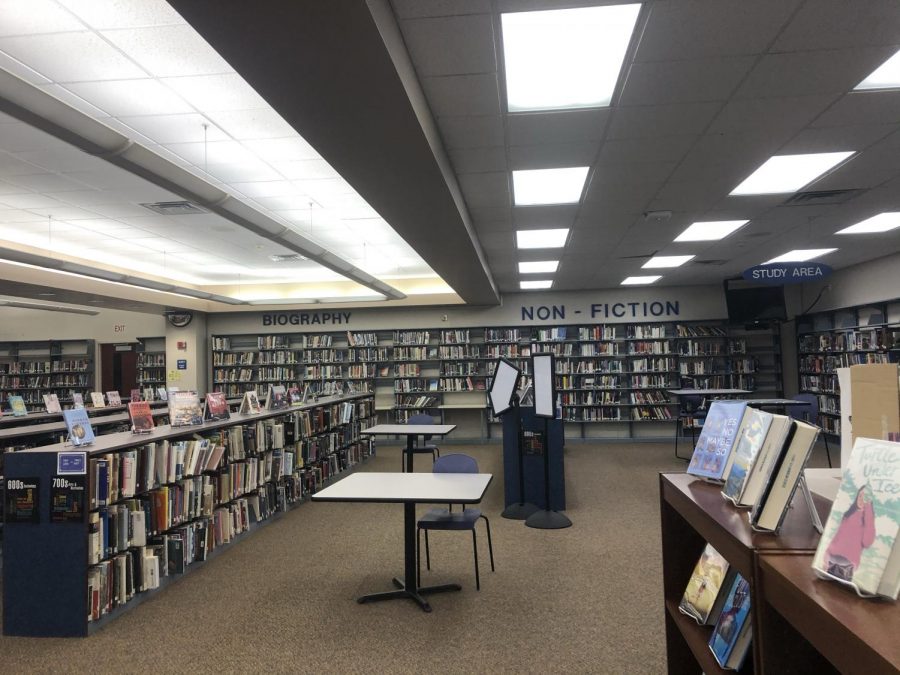 Usually before Midterm week the Library is overcrowded and noisy with students studying together; this year, it was almost completely empty.

Students did not have to take midterms this year due to difficulties with remote learning, scheduling, and the impact it has on the classroom.
There have been committees created since the end of the last school year that decide what would be best for students related to grading, schedules, and education in general. The decision to cancel midterms for 2021 was made by the department chairs and the administration.
January Regents Exams, which usually would be taken at the same time as midterms, were canceled, too.
“What made it easy was that the state is canceling the Regents exams, so that kind of made it an easier decision along with other factors,” said Assistant Principal Mr. Yarmus.
One of the other factors was the amount of time that the school has already lost being added to the time it takes to prepare for and take midterms.
“It’s a whole week that we give up just to give tests, but we lose more time than that. Usually, teachers will review for a few days before that and teachers need time to grade the midterms and so, you will get two whole weeks of no teaching going on,” said Mr. Yarmus.
There were other concerns, such as where students would take their exams because the school couldn’t put as many kids into the testing locations as they would normally be able to or how to give fair and secure tests while some students are remote.
“It would be difficult to administer a midterm in this environment that would be fair given the varied learning experiences that students have had,” said Mr. McElroy, the social studies department chair. “I think a series of high stakes exams are the last thing that students need in the middle of a pandemic.”
“I like not having midterms because I felt that when we weren’t being tested we were able to actually learn something without just memorizing information for a giant test in the middle of the year and one at the end,” said junior McKenzie Verra.
Verra did bring up that there may have been some students that felt that they did not need to study or learn the material because they weren’t being tested.
Some teachers have come up with other ways, like making up their own tests or projects, to see how well their students understand the information they’ve been taught.
Verra is taking AP Biology this year and her teacher, Mr. Lewis, gave a final exam for the semester.
She said that the exam was different from what was happening in her other classes and from how midterms would usually be administered; however, she also said that it added some normalcy since it was similar to a normal year’s midterm.