Jessica Ader is the athlete of the week for October 8 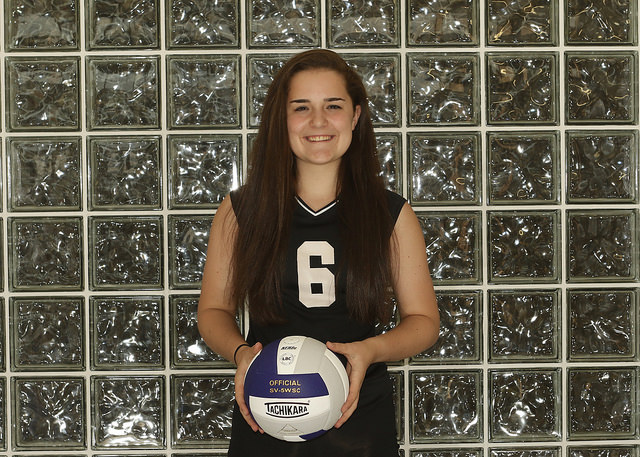 Jessica Ader was chosen to be athlete of the week for the week of October 8. After playing in clinics since fourth grade and then moving onto the modified team in seventh grade, she is now captain of the Monroe-Woodbury Varsity Volleyball Team for her senior year.

Jessica always puts in her best effort when it comes to playing volleyball with her team.

“Becoming athlete of the week was just an added bonus,” said Ader.

Ader was going to try out for softball but later realized that softball was not the sport that she wanted to play, so she later tried out for the volleyball team instead. Since then, she has grown to love volleyball.

“When a ball is coming your way at thirty miles an hour and you can just get behind it and get it up, that’s exhilarating for me. I love that feeling! But in general, I love the sport and waking up every day and being able to play is just a blessing!” said Ader.

According to a district press release, Ader plays an integral role on the team and “she has shown leadership skills on and off the court.” Ader played a major part in helping teach modified volleyball players key skills in preparation for moving up to the high school teams.

So far this season, Jessica has totaled 48 kills as a starting outside hitter, 20 digs as a defensive player, and 22 aces as a server, with an impressive serving percentage of nearly 85%.

Although, volleyball is not the only thing that Jessica does in her free time. She is an art major and going for her comprehensive diploma.

“I’m actually an art major, so I spend a lot of time drawing, but I am also trying to get my comprehensive diploma so I do a lot of volunteer work outside, too, and when I’m not doing either of those, I am either doing homework, sleeping, or going to the gym” said Ader.

In addition to the workload Jessica already has, she does other after-school activities such as the Interact club and the National Honor Society. In spite of the fact that Jessica is very busy, she still maintains her grades.

“When I’m in season, I have a constant regimen of ‘I need to get this done now because I have a game later’,” said Ader.