Review: “Totally Accurate Battle Simulator” is Quite the Spectacle 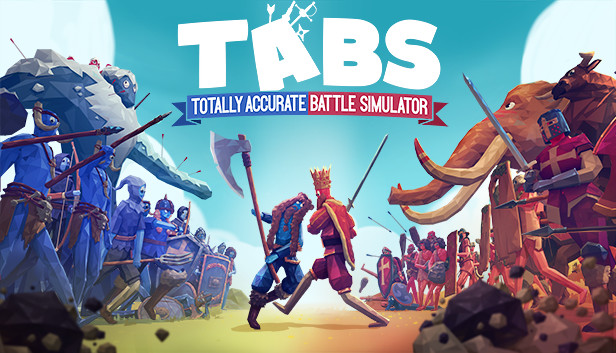 From peasants to Roman soldiers to gods, Totally Accurate Battle Simulator (TABS) has all the mayhem and nonsense you would want in a sandbox game.

TABS, as it’s known, is a battle simulation game with ragdoll physics and fun twists. The basic idea of the game is for you to set up a battle between two sides to see which side will win. You can choose between many different factions. The current factions are Tribal, Farmer, Medieval, Ancient, Viking, Dynasty, Renaissance, Pirate, Spooky, Legacy, and Secret. The Secret faction must be unlocked via collectibles on various maps. Units in a specific faction can be used with units from any other faction. It is quite the spectacle to see knights running in, backed up by tanks, or cavemen fighting alongside a shield-wall of hoplites. There are also multiple maps as well, corresponding to the different factions. Of course, the best part of the game is the look of the characters. Every character has googly eyes, from the mammoths to the berserkers.

Sandbox mode is the main focus of the game. You can choose the map, the units, and the win conditions for a battle. There are no limits to the mode except for how well your computer can handle so many units. After you create a battle, you can even upload it to the steam workshop to share it with others. A campaign for the game exists as well which is fairly simple. In the campaign, you are given a limited amount of funds to try to beat the opposing army. There are a few levels where you will have to make an effective team comp, or you could control one of the units to outsmart the AI. Controlling units is a feature recently implemented into the game. Usually, you would just press start to begin the battle and watch to see which side wins. Now, you can take control of a single unit to guide their actions and movement. There are also some fun options included in the free DLC (downloadable content), called bugs. They are toggle features that can drastically change the game, such as giving all units wings and making all units spin.

Overall, TABS has been on my radar for a while now. It was initially released in Closed Alpha in 2016, but it finally came to Early Access in 2019. The wacky physics and art style of this game really draw you in. Paired with the fun gameplay unique units in the game, the possibilities are endless. The AI can make stupid decisions sometimes, and each battle will turn out differently. The sound design and the strange voices of the units are fun features as well. The game technically is not out yet, but it can still be bought and played on PC. It will be coming out on the Xbox game pass in the future as well. Overall, the game is always a blast to come back to, and it will always be one of my favorite games. I give it a 9/10 for the fun gameplay and frequent updates. It doesn’t have a gripping story or any characters at all. It’s up to your imagination and that’s one of the reasons it’s so great. You decide the story, the characters and the battles.